Managing rumours during an ITN distribution

Malaria continues to be one of the most dangerous diseases in the world, and the use of insecticide-treated mosquito nets (ITNs) continues to be one of the most effective ways of protecting people from the disease. ITNs are only effective if households believe in their efficacy to prevent malaria, and use them properly. One of the major setbacks to ITN distribution (whether via a mass campaign or through continuous distribution channels), ITN use, care and repair, is mis- or disinformation and rumours. If unchecked, these have the risk of eliminating any gains that countries may have made in reducing the malaria burden in their country.

In July 2021, many counties in Liberia started reporting the emergence of rumours linking the ITN campaign with COVID-19. These rumours were created because the increase in COVID-19 cases during Liberia’s third wave coincided with the distribution of ITNs through the mass campaign. The scope and scale of these rumours varied greatly across counties, ranging from localized rumours that were quickly dispelled, to district level rumours that resulted in refusal to accept ITNs, misuse of ITNs and even in the destruction of ITNs.

Between 9—12 July 2021, the national malaria programme conducted a rapid assessment among county health teams (CHTs) to assess the scope and scale of the rumours affecting the ITN campaign. Rumours were identified from eight counties and were reported to affect an estimated 33 districts (out of a total of 54 districts). Three of the CHTs reported that the rumours had spread across the entire county. The rumours reflected negative perceptions of ITNs, including views that the ITNs are harmful, deadly and able to transmit COVID-19 to humans. The rumours in circulation also touched on issues related to production, access and use of the ITNs. Some specific rumours reported (organized under a central theme) included:

In general, the rumours had a very negative impact on the campaign and ITN use. A number of counties reported:

The rapid assessment was not only to assess the scope and scale of the rumour, but also to help plan a response. This included a survey of the different communication channels that could be used to address the rumours. The social and behaviour change (SBC) activities or communication channels most frequently mentioned as best suited for the affected areas included community meetings and focus group discussions, community health volunteers (CHVs) and community health assistants (CHAs), town criers and motorized street announcements, as well as mass media such as local radio stations. 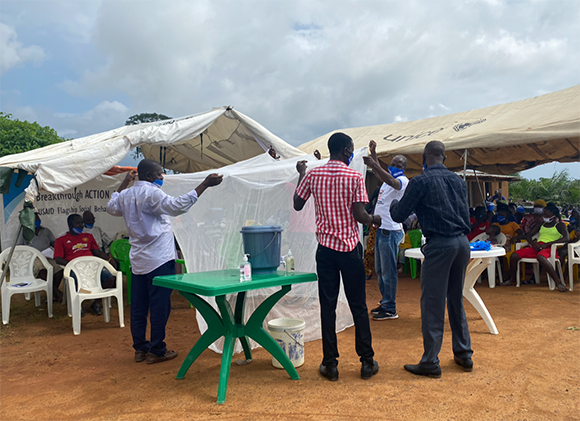 ITN use, care and repair demonstration during community sensitization session.

The rumours were identified during the actual implementation, when many CHTs had not yet undertaken planned SBC activities. Given the scope and scale of the rumours, it was critical that a response be immediate. Following brainstorming sessions with CHTs, a set of immediate actions were recommended to respond to the rumours:

At all levels, national malaria programme and CHTs, with support from partners: 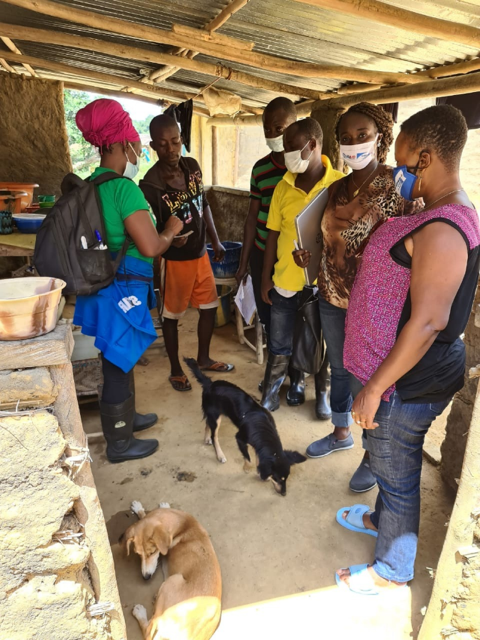 Several key lessons were learned in Liberia during this crisis. For SBC, none were more critical than the importance of having a strong rumour management plan that fully details the process for managing and responding to rumours. With support from technical partners, the national malaria programme had drafted a rumour management plan, but this was never finalized nor was it budgeted.  This lack of available funding can create delays in the response to rumours, increasing the risk that rumours spread further and become unmanageable.

Going forward, it is critical that national malaria programmes ensure that robust and detailed rumour management plans are developed, that these are budgeted, are approved and adopted, and that the various components of the plan (including the roles and responsibilities of all stakeholders) are disseminated before the implementation of the campaign.

Drawing from the various lessons learned, AMP had developed a detailed guidance on the management of rumours and a template to guide the development of a rumour management plan as part of the macroplanning package. Please refer to the following link on the AMP website.