A school-based SBC approach in the distribution of over 8.8 million ITNs in Kano State, Nigeria 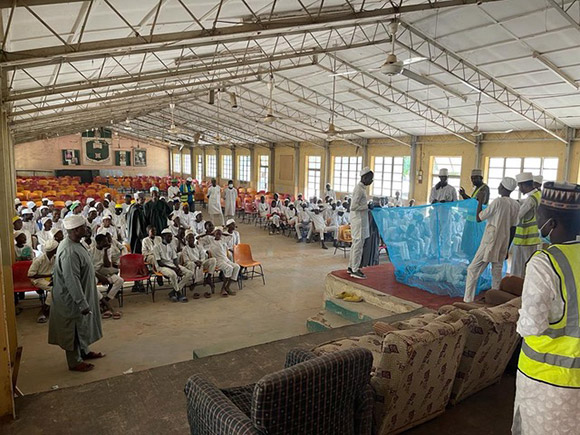 Demonstration of net use and care during school sensitisation session.

Kano, Nigeria’s most populated State with a population of over 16 million, is located in the northwest region of the country with 44 Local Government Areas (LGAs). The annual average temperature of Kano State is between 260C to 300C with a relative humidity of between 17 and 90 per cent respectively, making it an environment attractive to mosquitoes for breeding. Kano State is quite heavily industrialized with a large variety of trades and industries.

Malaria episodes are experienced all year round in Kano State with a current prevalence of 26 per cent (MIS, 2021). Malaria is one of the leading causes of mortality and morbidity in Kano and Nigeria in general. The Government of Nigeria piloted the first ITN mass distribution in Kano in 2009 and the State has continued to implement mass distribution campaigns every three to four years. 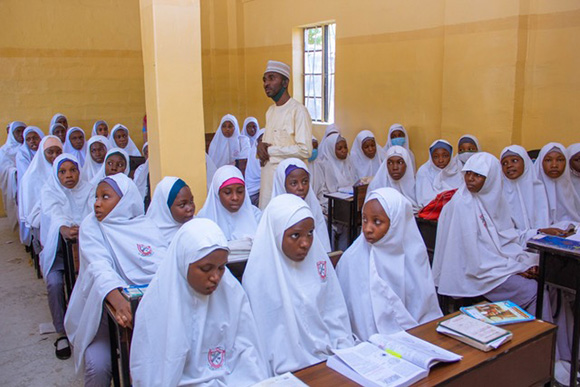 Sensitisation of students by health teacher.

SBC, also called Demand Creation (DC) in Nigeria, is a key component of the ITN mass distribution campaign funded by the Global Fund. The SBC or DC strategy has the following objectives:

To achieve these set objectives, SFH made use of different information dissemination approaches like mass media, advocacy to stakeholders, street announcements, town announcements, orientation and sensitization sessions with various groups. Advocacy was conducted with School Management Boards of both government and private schools to gain their support, collaboration and ensure sustainability.

The school-based approach was used for orientation of health teachers and sensitization of school students across the 44 LGAs in Kano State during the ITN mass distribution campaign in 2022. SFH engaged Civil Society Organizations (CSOs) to implement the orientation and sensitization of various groups. One CSO was engaged per LGA and they used the data collected during microplanning for implementation. The schools (both primary and secondary) were selected based on population per wards with a maximum of two schools per ward. Orientation sessions targeted health teachers who were invited to clusters for capacity-building sessions on malaria messaging. The health teachers were thereafter expected to conduct sensitization sessions targeted at students in their respective schools by providing key malaria messages during assembly or health club meetings, especially on net use and care. These sessions were expected to last between 30—40 minutes so as not to take too much of the students’ time. Messages were kept short and precise for easy understanding and dissemination. 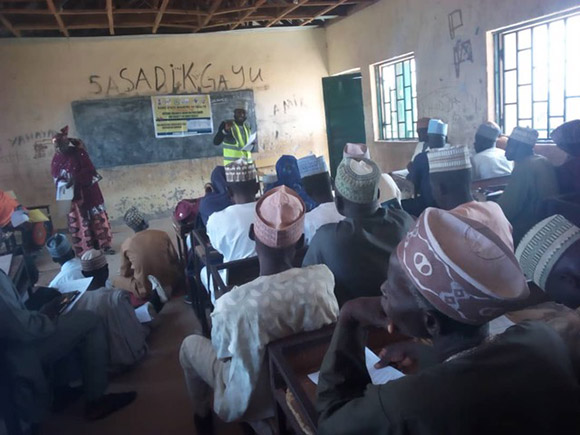 The school-based approach was implemented pre-campaign, during the campaign and post-campaign. The CSOs were provided with SOPs, which guided them to provide information and ensure delivery of quality messages across all the LGAs. The teachers were provided with tools to help them sensitize their students on malaria diagnosis, treatment and prevention including net use and care. During distribution, the CSOs visited the health teachers in their schools and supported them to organize sensitization sessions with their students. Health teachers led while the CSOs provided technical support during sensitization sessions across all the wards in the LGAs. The post-campaign phase included school-based activities with health teachers and students. The messages were designed to provide information on the need for households to take down the old nets received during the previous campaign and hang up the new nets after airing for 24 hours. These messages were accompanied with net hang-up demonstrations to ensure proper use of the nets.

A total of 44 CSOs were trained to implement the school-based SBC approach in Kano State and 4,079 health teachers were trained across the 44 LGAs. These teachers were equipped during the orientation sessions with malaria messages and skills on how to hang up and use ITNs. One of the health teachers, Mal. Muazzam Ibrahim from Bichi LGA, said “The knowledge I received from the training is new to me and I promise to pass it on to my students and to use it in my own household”. According to another teacher, Mal. Kabiru Alhassan, from Maaji Secondary School, Sumaila LGA, “After the training, I went to my community (and) educated people on the benefits of airing the nets in the shade for 24 hours and supported families to hang up the nets”.

A total of 45,064 students were sensitized during the implementation across 44 LGAs in Kano State. The students, as agents of change, received messages and skills to help support their families in net use and care. One of the students, Ali Nasiru from Bichi LGA said “I always discuss with my parents what is taught in school every day. So, I will discuss with them the benefits of sleeping inside the net every night”. 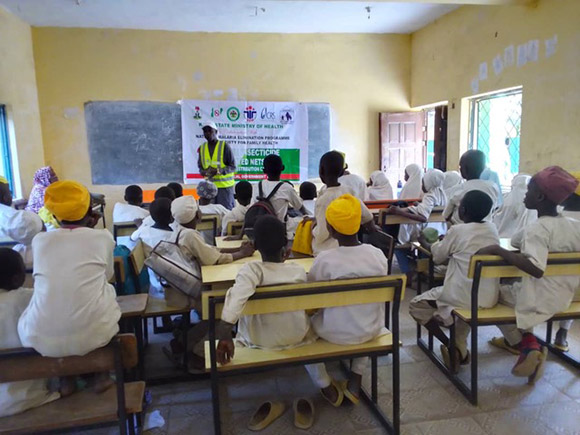 Some of the challenges faced in the implementation of orientation and sensitization sessions included:

The use of a school-based approach recognizes the importance of children as agents of change and the need to empower them with malaria prevention messages and skills that can lead to increased net use and care in households. This approach is recommended for scale-up in Nigeria because children are the future leaders and members of our Nation. Health teachers can be used to continue promoting malaria prevention practices through schoolchildren even after ITN campaigns for sustainability within the communities. The school-based approach has a ripple, multiplier effect that can lead to change in behaviour by community members.