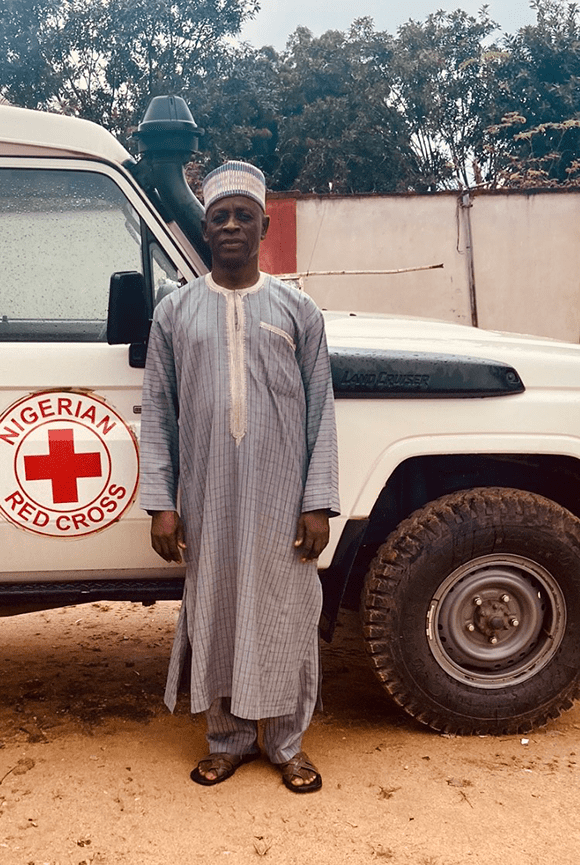 This is Paul Achagwe. Paul was born in Borno state, Nigeria near the village of Lassa. In 2014, the non-state armed group Boko Haram entered Paul’s village and killed 54 people in a single day. All houses were searched and most of them destroyed. Paul and his family took refuge in the mountains for three days before coming back to their houses and collecting some of their things.

Paul and his family fled their hometown along with other members of their community and reached the town of Jalingo in Taraba state, where the local government allowed them to settle in an empty building. Other internally displaced (IDP) members of his community took refuge in churches and schools. In Jalingo, the Taraba branch of the Nigerian Red Cross immediately provided support to his community after their arrival.

For the following four years, Paul and his community faced harsh living conditions, people living on top of each other in an unsanitary environment, widely exposed to mosquito bites from sub-standard accommodation and the proximity of stagnant water near where they were staying. He recalls how more than 350 people lived together in the building at any one time, but many of them were forced to sleep outside because of the lack of space. Malaria became one of the biggest challenges in Paul’s community and many people fell sick with the disease.

One year after their arrival, the IDP community received some mosquito nets from the Nigerian Red Cross and UNHCR, but there were not enough and only a small portion of the community was able to sleep under a net at night. The available nets were tied to the ground using sticks or tucked under rugs to keep mosquitoes at bay. Using the nets properly was difficult and sometimes, children would “fall out” of the net during the night and get bitten by mosquitoes.

Paul also explains how the nets were quickly damaged, being carried from indoor to outdoor areas continuously. The nets tore and got dirty, but people continued to use them as they did not have any other solution. Paul was anxious about the lack of nets for his family and his community. Before the conflict, he used to buy mosquito nets for his family to protect them from malaria and would not wait for the government to provide them.

Today, Paul and his family live as part of the local community in Jalingo. Paul advocates for the needs of his community, including for better vector control solutions. IDPs from Borno state are present within 33 communities in Taraba. Paul estimates that more than 50 per cent of his community members outside of Jalingo do not have access to mosquito nets to protect them against malaria.

Paul and his family sleep under a net every night. They have been using the same mosquito nets that they received in 2019, but there are not enough to cover everyone. Two weeks ago, two of Paul’s grandchildren fell sick with malaria and he has not yet been able to pay back the cost of their treatment. Paul is hoping that all his community will receive nets during the 2022 ITN mass campaign planned in Taraba state in September to protect them from malaria.