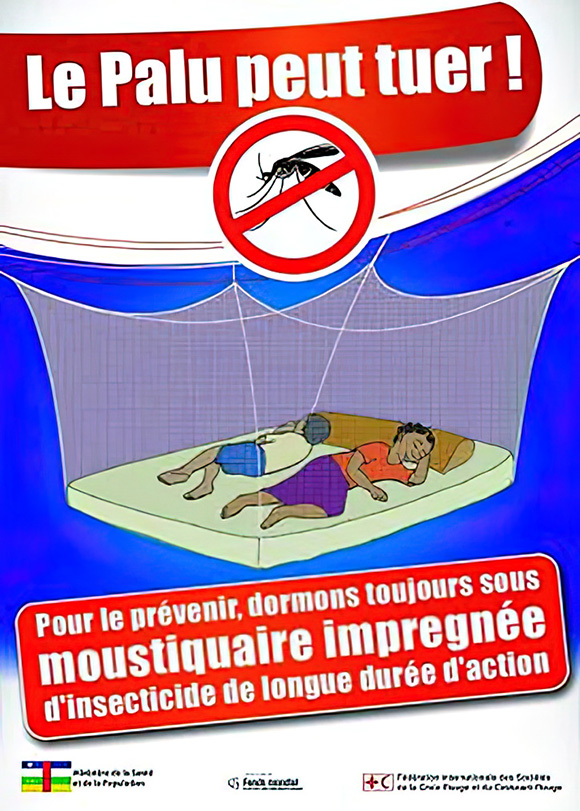 The Central African Republic (CAR) has been facing a socio-political and security crisis since December 2012. Approximately 80 per cent of the national territory has been occupied by armed groups. While the country experienced relative calm from 2016 until November 2020, the political and security environment gradually deteriorated in December 2020 with combined armed groups launching attacks in several towns in the country.

Currently (2022), aaccording to the United Nations Office for the Coordination of Humanitarian Affairs (OCHA), 3.1 million Central Africans, or one in four of the population, are in need of humanitarian assistance and protection1.

CAR has a population of approximately five million (October 2022)2. According to routine health system data, in 2020 malaria was responsible for 63 per cent of medical consultations compared to 40 per cent in 2001. Children under five years of age, who pay a heavy price for malaria, represent more than half of all cases, i.e. 57.7 per cent.

However, during the period of insecurity and despite the COVID-19 pandemic, the Government of CAR, with the support of its decentralized health structures and partners, ensured the continuity of health services to the population. This included the implementation of insecticide-treated net (ITN) distribution campaigns between 2015 and 2022 in targeted regions of the country to reach universal coverage as per WHO guidelines.

Organization of the ITN mass campaign in Regions 4, 5 and 6 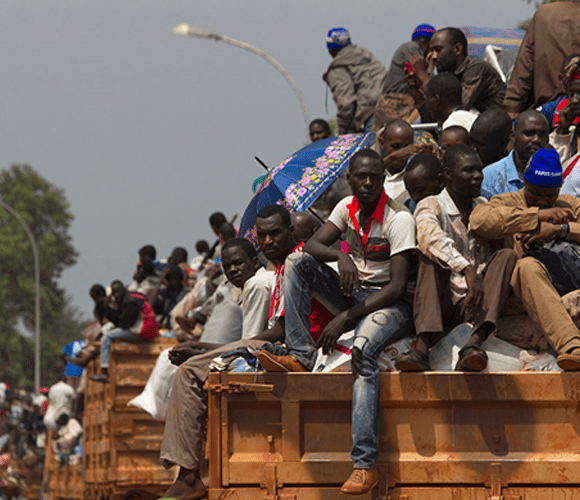 A mass distribution was planned by the National Malaria Control Programme in 2017 to accelerate the scale-up of interventions and to maintain universal coverage of the population with long-lasting insecticide-treated nets. The objective was to protect at least 80 per cent of the general population against malaria.

To achieve this goal, the country had planned the ITN distribution campaign for 2017 in Health Regions (HR) 4, 5, 6 and 7, which were not part of the 2015 and 2016 ITN campaigns (which covered HR 1, 2 and 3). This campaign was, however, delayed to 2018: the security context in HR7 (population movement to Bangui and the surrounding area) and HRs 4 and 5 (clashes between armed groups) meant that a detailed analysis of the situation was needed, informed by a lessons learned workshop, that led to the separation of the campaigns into separate phases. In addition, the choice of implementing partners required a lengthy process to ensure transparency in the recruitment process.

Unfortunately, in 2018 the country was still suffering the effects of the crisis that began in December 2012, interrupting the implementation of health interventions and disrupting the social and health contexts in the country. Displacement of the population to IDP camps was a major concern.

According to data from the 2016 Malaria Indicator Survey (MIS) survey, malaria was responsible for 65 per cent of consultations compared to 40 per cent in 2001. In 2016, the prevalence of malaria varied by region; it was lowest in Health Region 7 (21 per cent) which benefited from mass ITN distribution campaigns and access to health facilities and pharmacies but was significantly higher (76 per cent) in Health Regions 1, 2, 3 and as high as 90 per cent in Health Regions 4, 5 and 6 where ITN distributions had not yet been carried out.

Several problems or challenges were encountered in organizing the 2018 campaign, including

To successfully implement this ITN campaign, the Ministry of Health chose to work with international and national organizations that were already implementing humanitarian activities in the country. The NMCP and partners were able to discuss with the representatives of these local/international non-governmental organizations (NGOs) during coordination meetings. The recruitment process for implementing partners used several criteria (including presence in the area, human resources, experience with grant management, experience with campaign service delivery, etc.) and resulted in several NGOs supporting the implementation of the campaign, as can be seen in the following table:

The NMCP met with these partners in the different regions to learn about the context and practical conditions for implementation. Following the recruitment, the NMCP worked with the selected NGOs to adapt the existing macro level plans and develop microplans that were aligned with the specific context of each targeted area.

The campaign faced many challenges, including the dissatisfaction of some authorities and armed groups, insecurity and confrontations between armed groups, and population displacement between regions. To overcome these challenges, the NMCP had to strengthen communication through advocacy meetings and advocate with local authorities (administrative, health, civil society, opinion leaders, youth and women’s representatives) to mobilize households to participate in the campaign.

The NMCP also had to advocate with armed groups (Seleka, anti-Balaka or their factions or splinter groups) for safe access and free movement of people (both campaign workers and household recipients) living in localities where the public authorities were no longer present and functional or whose position had been greatly weakened. The security context required the NMCP to collaborate with armed groups who controlled approximately 80 per cent of the national territory, and who possessed the required logistical resources to implement the campaign.

To reach some of the targeted areas in HR 6 (such as Zemio), ITNs were transported using air travel. In others, such as in the north (as in the case of Birao), it was necessary to send the ITNs early because it took about three weeks to get the ITNs to their destination before the roads became impassable during the rainy season. To supply ITNs to teams in communities, the logistics operation had to use transportation means that were locally available (4×4 vehicles, motorcycles, donkeys, pirogues, bicycles, porters, etc.).

Coordination, support during implementation and oversight of procurement and finance management were decentralized through Reinforcement Teams, and on-site implementation plans were established and adapted to the field context to achieve the desired results. These adaptations of strategies were made to gain the confidence of local authorities, the population and armed groups but also to take into account population movements that left some villages completely empty, newly created formal and informal IDP camps, rising costs of vehicle rental, fuel etc.

Despite the complexity of the situation, the campaign went well overall, with campaign actors satisfied with the results obtained.

Some of the other main achievements included: